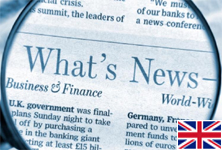 The Bank of Japan, at the conclusion of its July meeting, kept key monetary settings steady, but trimmed its growth and consumer inflation forecasts for the current fiscal year. The target for Japanese 10-year government bond yield was left at around 0%, while the interest rate for balances in current accounts held by financial institutions at the BoJ remained at -0.1%. Moreover, the regulator reiterated its guidance that the key rate will stay at a “very low” level until at least the spring of 2020. Policymakers passed the decisions by seven vs. two votes, as was the case at the previous meetings. However, BoJ economists cut the target for the core CPI (consumer prices, excluding fresh food) from 1.1% to 1.0% for the current fiscal year ending in March 2020. The GDP outlook for the period was trimmed to 0.7% from 0.8%. Furthermore, in its press release, the BoJ signaled monetary policy easing in the foreseeable future. Notably, policymakers pledged to provide more monetary stimulus if significant downside risks emerge. Thus, the BoJ comes out with dovish narrative as markets expect monetary policy easing from the US Federal Reserve and the European Central Bank.

Britain’s total consumer lending jumped 5.5% y-o-y in June after rising 5.7% y-o-y in May, BOE data show. Lending growth has steadily decelerated since 2016, and the June reading is the lowest since March 2014. At the same time, the mortgage lending market started to recover. Approved mortgage loans increased by around 800 to 66,440 in June, the highest mark since January. Extended home loans rose from GBP 2.9 bn in May to GBP 3.7 bn in June. Business loans (except for financial firms) totaled GBP 2.6 bn, or above the six-month average. UK government bonds purchased by nonresidents last month amounted to GBP 7.3 bn vs. GBP 10.5 bn in May, the Bank of England said in a press release.

Key US stock benchmarks showed mixed performance on Monday, July 29, ahead of the outcome from the Fed’s two-day meeting that gets under way today, and a fresh set of earnings releases, including those from such heavyweights as Apple, General Motors and General Electric.

In addition, investors are focused on a new round of US-China trade talks. The negotiations will be held in Shanghai and will start today, on July 30. Secretary of Treasury Steven Mnunich and US Trade Representative Robert Lighthizer are to represent Washington during the talks.

Among the notable outperformers, pharmaceutical company Mylan spiked 12.6% on encouraging financials for the second quarter. In addition, the company confirmed rumors that it is about to merge with Pfizer’s off-patent drug unit. Pfizer shares, in turn, gave up 3.81%.

The world’s biggest hydraulic equipment manufacturer Parker-Hannifin (-1.2%) took a hit after reports that it agreed to acquire Exotic Metal Forming, a producer of metal components for the aerospace industry, for USD 1.56 bn.

Payment system operator PayPal Holdings underperformed (-3.5%) after being downgraded from Neutral to Sell at Guggenheim.

The daily chart below shows that the S&P 500 is trading near the upper line of Bollinger Bands, while the Slow Stochastic Oscillator is in overbought territory. Consequently, short-term upside potential is limited. 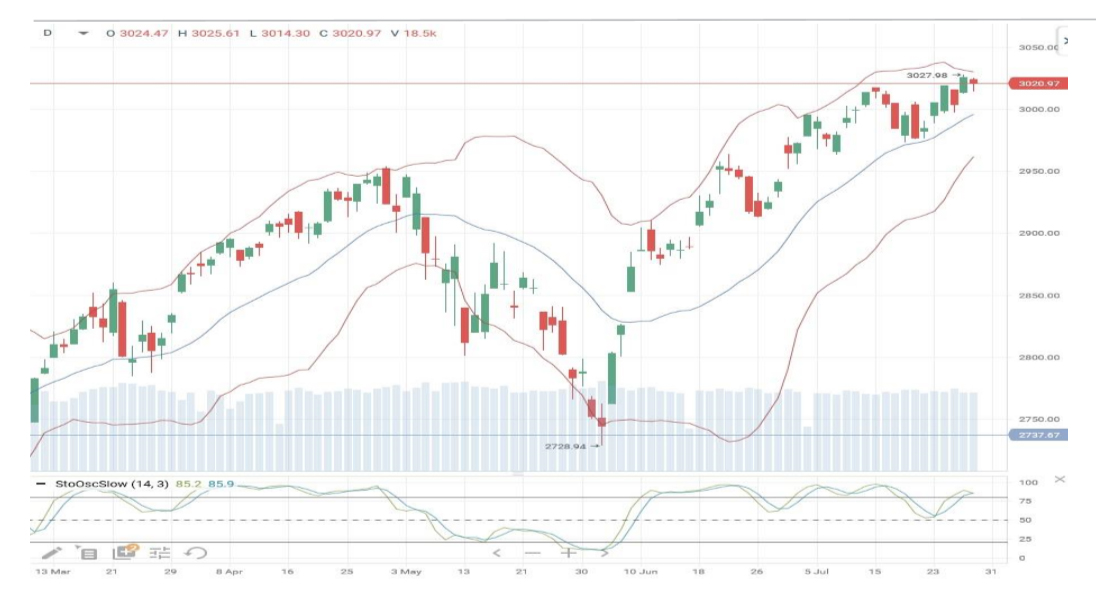 Key European stock indices delivered mixed performance on Monday, July 29, as concerns about the FOMC meeting and Heineken’s downbeat earnings were offset by positive M&A news that lent support to the UK’s FTSE 100.

The London Stock Exchange Group soared 14.6% after saying that it is in talks to acquire analytical data provider Refinitiv Holdings for USD 27 bn, including debt.

Online food delivery services provider Just Eat bolted up 25.3% on news that it will be acquired by Dutch rival Takeaway.com. Notably, the deal will create a GBP 8.2 bn (USD 10.1 bn) player.

Key European stock indices have been trading range-bound during the first half of Tuesday, July 30, under pressure from downbeat earnings guidance announced by German majors Bayer and Lufthansa. Moreover, the UK’s FTSE 100 has been negatively impacted by cable weakness.

The daily chart shows that the German DAX is trading close to the lower line of a rising wedge. Given the absence of overselling signs, the benchmark will likely attempt to break through the lower end of the current formation in the short term. 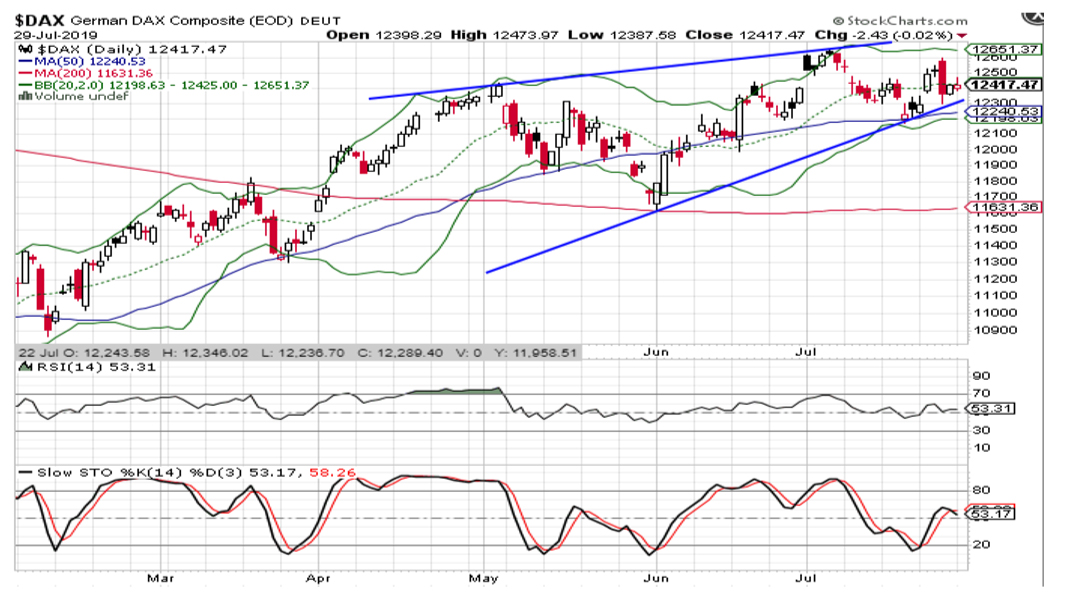 Asian stock indices turned in mostly positive performance on Tuesday, July 30 in the aftermath of the Bank of Japan’s monetary policy meeting. Notably, the regulator left the deposit rate at -0.1% and the target 10-year bond yield at about 0%. Furthermore, the regulator will continue to purchase government bonds at a pace of JPY 80 tn per year. Policymakers passed these resolutions by a 7-2 vote, with board members Goushi Kataoka and Yutaka Harada dissenting. However, the regulator cut its consumer inflation forecast from 1.1% to 1.0% for fiscal 2020.

On the macro front, South Korea’s Business Climate Index for August came in at 74, down from 76 in the previous month.

On the S&P/ASX 200, Credit Corp Group and Newcrest Mining outperformed the broader market, soaring 4.11% and 3.08%, respectively. On the other side of the spectrum, Bingo Industries and Wisetech Global Limited slid 3.83% and 3.75%.

The Nikkei 225 gainers were led by Ajinomoto and Otsuka Holdings, which spiked 6.83% and 4.38%, respectively. On the downside, Nippon Electric Glass and Nippon Light Metal retreated 6.44% and 5.96%.

In the Australian banking sector, Westpac, Commonwealth, National Bank of Australia and Australia & New Zealand Banking ended in the green.

From a technical standpoint, a corrective pennant pattern could be shaping up on the Hang Seng, with the benchmark likely to break out to the upside and push higher towards 29,500 in the short term. 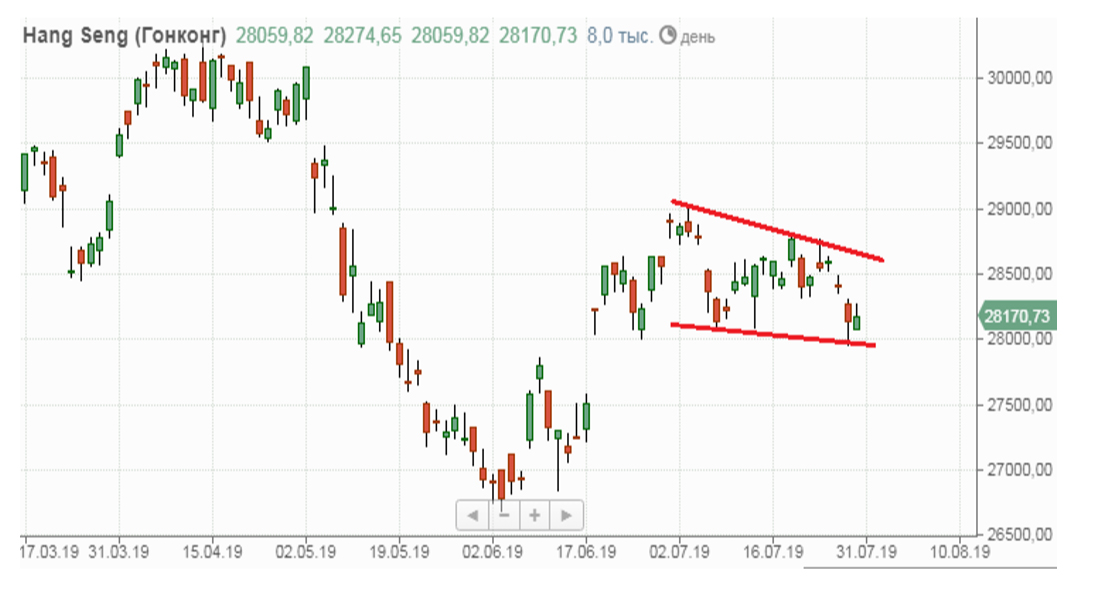 Oil has extended gains on Tuesday. Investors are hopeful that monetary easing on the part of leading central banks will support global economic growth and, as a result, crude demand. The Federal Reserve will hold a meeting this week and most market participants expect a 0.25% cut in the federal funds rate .

Meanwhile, the Bank of Japan left its monetary policy unchanged, holding rates at record low levels, and expressed its readiness to take decisive measures to support the economy if new downside risks emerge. The ECB hinted earlier that it could cut the key rate while exploring other options to sustain the European economy.

We also note that a new round of US-China trade talks will start today. While no major breakthrough is expected, some progress could be made. Specifically, Beijing could put forward a detailed plan for the purchase of agricultural machinery in the US, while Washington could take targeted measures to ease restrictions imposed on Huawei Technologies.

Non-ferrous metals are range-bound on the LME, while gold is still locked within a narrow range of USD 1,410-1,430/oz.