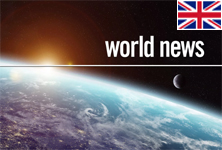 At the conclusion of its July meeting, the ECB predictably left the key lending rate unchanged at 0.0%, while the deposit rate remained at -0.4%. The regulator pledged to keep interest rates on hold or lower at least mid-2020, or until Eurozone inflation reached the 2% policy target. Earlier, the ECB expected to hold rates steady over that period. ECB President Mario Draghi told a news conference that the region’s inflation expectations have been on the decline, with consumer prices likely to decelerate in the coming months. Moreover, incoming macro data signals a slowdown in Q2 and Q3. As a result, the central bank thinks that the Eurozone economy still requires extensive monetary stimulus. According to Draghi, slowing global growth and trade frictions are exerting pressure on the economic outlook, especially in manufacturing. Geopolitical risks and broader protectionist policies also raise concerns. On the other hand, Draghi noted a low unemployment rate and faster wage growth as positive factors that support growth. Services and construction are still looking robust amid economic weakness, with corporate lending volumes also running strong. Furthermore, Draghi said that any potential rate cut would be followed by respective actions in order to mitigate a negative impact on the banking sector. Earlier, he has said on several occasions that European banks are struggling with the current interest rates that have remained negative for a long time already.

Germany’s Business Confidence Index dropped from 97.4 in June to 95.7 in July, research institute Ifo said. It should be noted that the index has been falling for four months already, and the July reading is the lowest since February 2009. The Current Conditions Index decreased from 100.8 to 99.4 in July, while the business expectations sub-index dropped from 94.2 to 92.2. Confidence also deteriorated in trade and services sectors. At the same time, the index for the construction index improved. To remind, Ifo confidence indices are calculated by polling around 7,000 German executives and are an important gauge of the country’s economic conditions

Initial US jobless claims drop to the lowest since April

The number of Americans who applied for unemployment benefits for the first time decreased by 10,000 to 206,000, the US Department of Labor reported. The claims reached the lowest mark since mid-April, while analysts on average forecast an increase to 218,000. The four-week average, a less volatile indicator, fell from 218,750 to 213,000, while the number of those who are still paid unemployment benefits for the week ending July 13 dropped by 13,000 to 1,676,000.

Key US stock indices closed lower on Thursday, July 25 as investors were mainly focused on corporate earnings reports and the outcome of the ECB monetary policy meeting.
Having left its key rate unchanged, the European regulator tweaked its outlook. The ECB currently expects that the key rates will remain at the current or lower levels at least until the end of the first half of 2020 or until Eurozone inflation returns to the 2% target. ECB President Mario Draghi, in turn, emphasized that the Eurozone faces downside risks associated with trade conflicts and slower global economic growth. He is also concerned about a slowdown in the European inflation rate.
The ECB’s revised forecast put market participants on guard, fueling expectations that the Fed could take less aggressive measures at its meeting next week.
Yesterday’s macro showed that initial US jobless claims totaled 206,000 last week, while analysts forecast 219,000 after 216,000 a week earlier, and durable goods orders grew 2% vs. an expected 0.7% increase.
Recapping the benchmarks, the Dow Jones Industrial Average dipped 0.47% to 27,140.98, the S&P 500 gave up 0.53% to 3,003.67, and the Nasdaq slipped 1% to 8,238.54.
In commodities, September NYMEX WTI advanced 0.3% to USD 56.02/bbl, whereas August COMEX gold slid 0.6% to USD 1,414.70/oz. The 10-year US government bond yield stood at 2.07%.
Among the notable underperformers, electric car maker Tesla tanked 13.61% after releasing second-quarter financial results that fell short of Wall Street’s average expectations.
Major auto manufacturer Ford Motor pulled back 7.45% on worse-than-forecast quarterly earnings. Moreover, adjusted EPS stood at 28 cents per share, while analysts forecast 31 cents per share.
Underperformers also included aircraft producer Boeing (-3.69%) due to higher-than-expected losses in the past quarter.
Payment system operator PayPal Holdings plunged 5.1% after issuing disappointing guidance for 2019.

A bearish harami pattern has shaped up on the S&P 500 daily chart, while the Slow Stochastic Oscillator entered overbought territory. As a result, the index could move lower in the short term. 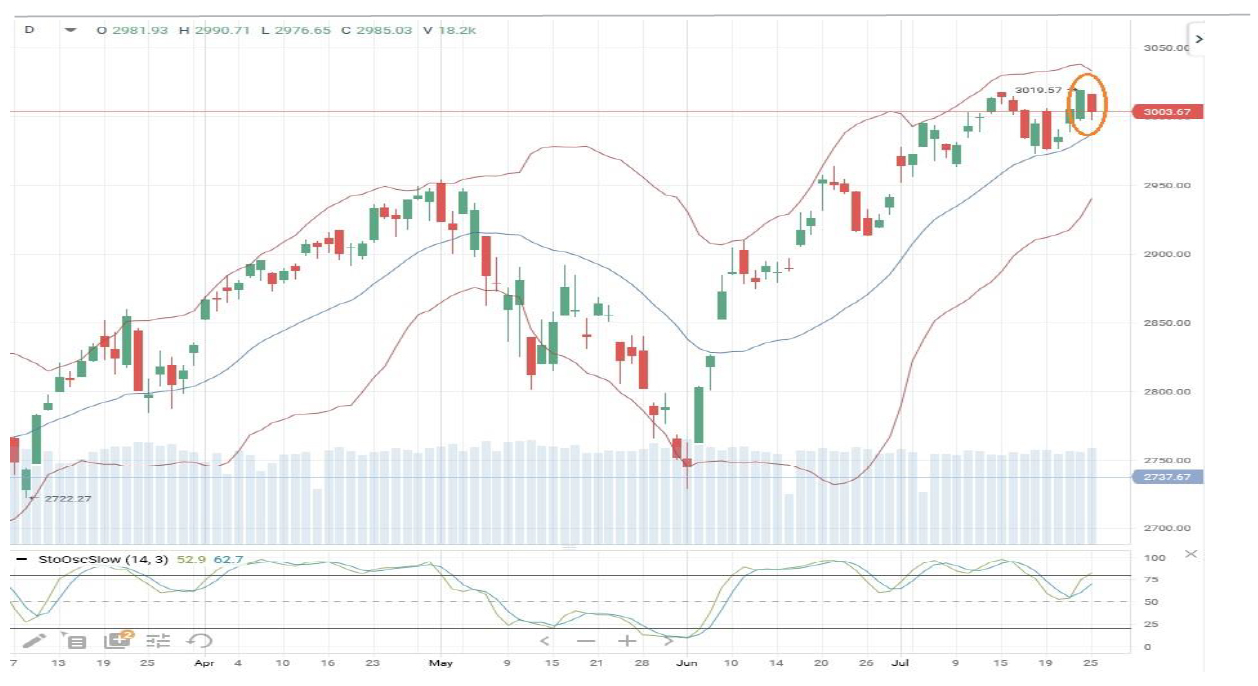 Key European indices landed in negative territory on Thursday, July 24, as ECB President Mario Draghi’s narrative turned out to be not as dovish as expected. Specifically, Draghi said that Eurozone recession risks are “pretty low”, so a rate cut was not on the table at this meeting as the regulator would like to see a new batch of macro data before taking any action. The ECB left the key interest rate unchanged at 0.0%, pledging to keep it on hold at least until mid-2020.
As regards macro data, Germany’s Ifo Business Optimism Index for July stood at 95.7, while analysts, on average, expected 97.4, following 97.1 a month earlier.
Recapping the benchmarks, the French CAC 40 dipped 0.50%, the UK’s FTSE 100 Index eased 0.17%, and the German DAX slid 1.28%. The regional indicator STXE 600 closed 0.56% lower at 389.52.
Auto component maker Hella plunged 6% after announcing a downbeat industry outlook, citing lower demand after weak earnings from Ford Motor in the US and Nissan Motor in Japan.
British pharmaceutical player AstraZeneca soared 7.7% after improving full-year sales guidance.
Anheuser-Busch InBev (AB InBev), the world’s largest beer brewer in terms of sales, surged 4.3% after reporting that its Q2 sales grew the most in the last five years.
British defense and aerospace corporation Cobham bolted up 35% after announcing that it accepted a GBP 4 bn (USD 5 bn) takeover bid from US investment firm Advent International.

The daily chart shows that an engulfing bearish formation has shaped up on the German DAX. As the benchmark does not look oversold at this point, the downtrend will likely gain traction in the short term. 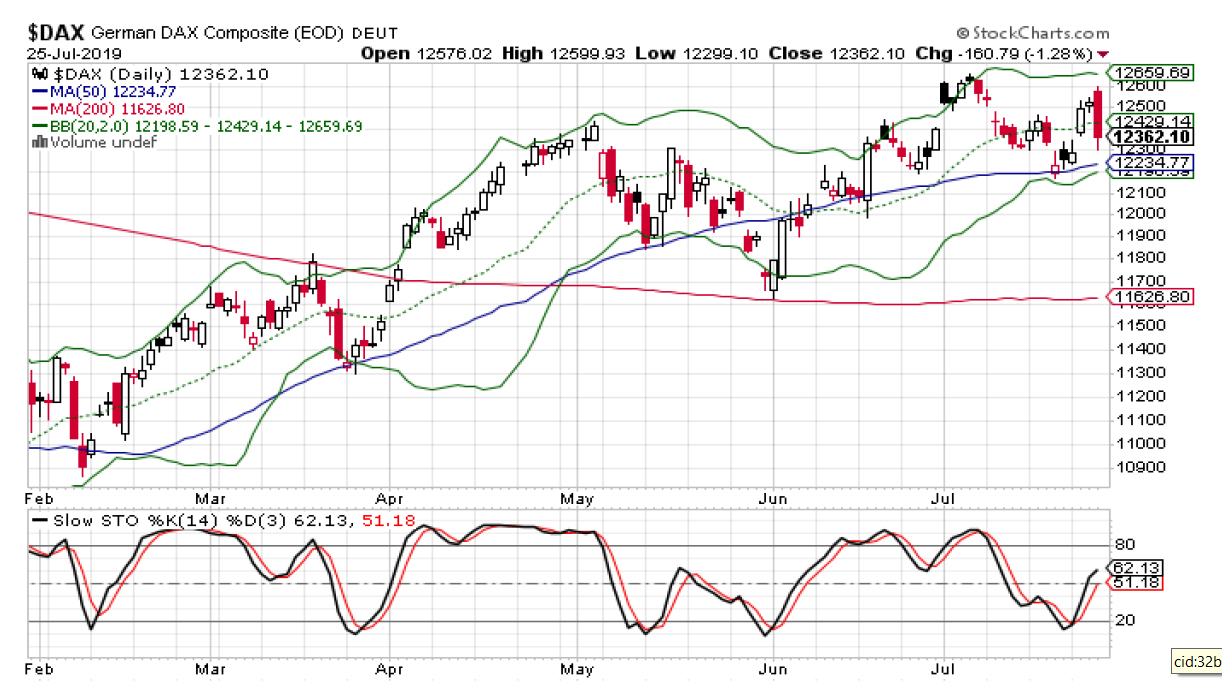 Asia: equities close to the downside

Asian stock indices landed mostly in negative territory on Friday, July 26, coming under pressure from news that Japan could remove South Korea from a list of trade partners with preferential treatment by August 2.
On the macro front, Japan’s Tokyo CPI rose 0.9% y-o-y in July vs. 1.1% y-o-y in the previous month. South Korea’s Consumer Sentiment Index for July came in at 95.9 compared to 97.5 a month earlier. Singapore’s manufacturing output increased 1.2% m-o-m in June, while analysts projected 0.7% m-o-m. In y-o-y terms, the indicator fell 6.9% vs. -7.9% expected.
Recapping the benchmarks, the Japanese Nikkei 225 decreased 0.45%, the Chinese Shanghai Composite added 0.24%, Hong Kong’s Hang Seng slipped 0.69%, the South Korean KOSPI eased 0.40%, and the Australian S&P/ASX 200 closed 0.36% lower.
On the S&P/ASX 200, Mineral Resources and Resmed outperformed the broader market, soaring 8.01% and 6.01%, respectively. On the other side of the spectrum, Speedcast International and IPH sank 8.42% and 5.73%.
The Nikkei 225 gainers were led by Fujitsu and Chugai Pharmaceutical, which soared 9.35% and 4.44%, respectively. Nisshin Seifun Group and Omron were among the session’s worst performers, retreating 10.7% and 7.45%.
Medical equipment maker Omron tanked 7.45% after reporting a 41% decline in quarterly operating profit to JPY 10 bn.

From a technical standpoint, a symmetrical triangle could be shaping up on the Hang Seng, with a breakout to the upside likely in the short term. 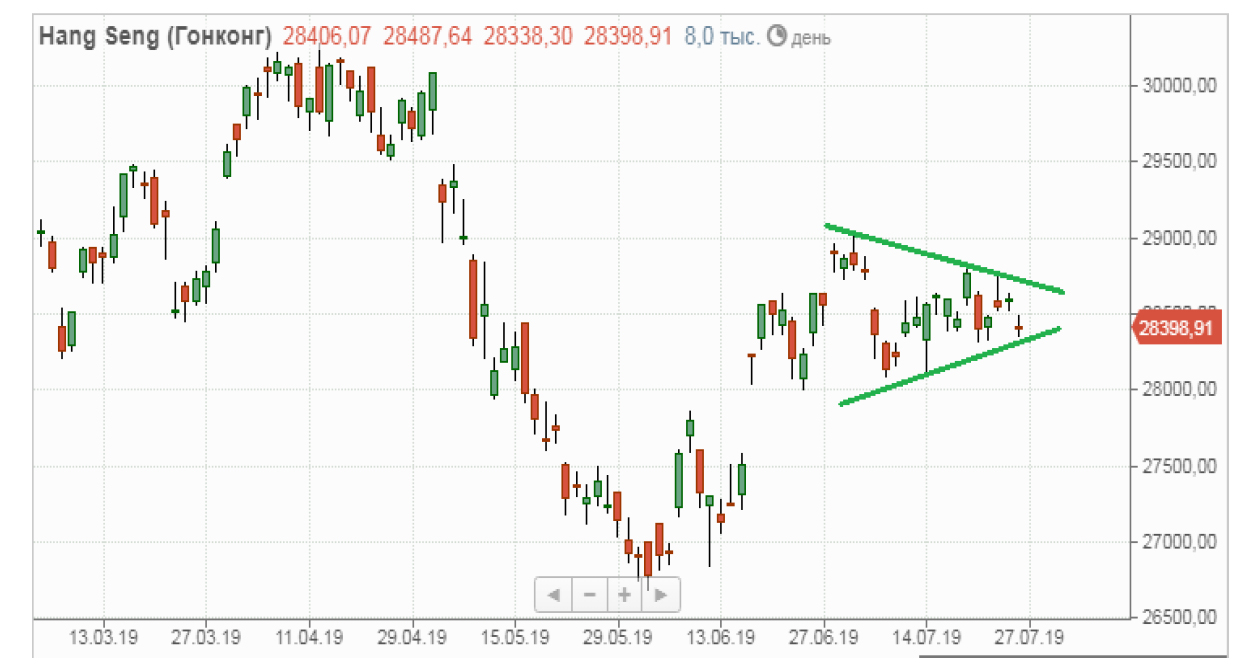 Oil has traded moderately higher on Friday and looks set to close the week higher. Since Monday, Brent has gained 1.6% and WTI is up 1%. Over the past few sessions, support has come from data showing a sharp drawdown in US inventories and oil production amid reports that the US delegation including Secretary of Treasury Steven Mnunich and US Trade Representative Robert Lighthizer will fly to China next week to resume trade negotiations. Moreover, investors continue to monitor Middle East tensions. According to CNN, Iran recently test-fired a medium-range ballistic missile. According to a CNN source, the missile was fired in the early hours of Thursday morning and flew around 1,000 kilometers, although it did not pose any threat to navigation or US military bases.
The crude market remains concerned about a further slowdown in global economic growth, which could dampen oil demand. IHS Markit data released on Wednesday showed weaker industrial activity in the world’s leading regions. Specifically, the US manufacturing PMI decreased to the 2009 low, while Germany’s index dropped to a seven-year low.
Non-ferrous metals are range-bound on the LME, while gold continues to hover around USD 1,420/oz.