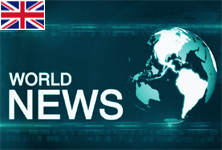 Existing home sales climbed 1.3% to 5.49 mn units in August compared to 5.42 mn units in July, the US National Association of Realtors said in a report. Analysts, on average expected sales of 5.37 mn units for the month. According to the report, the August reading is the highest since March 2016. Moreover, the median sale price for a new home was USD 278,200, up 4.7% y-o-y, with prices on the rise for 90 months in a row. At the current sales rate, it would take 4.1 months to clear inventory vs. 4.2 months in July. Notably, a 6-month supply would normally indicate a balanced market, while anything below five months points to a tight market. Sales of singlefamily homes increased 2.9% to 4.9 mn compared to 4.84 in July. In other housing segments, including townhouses and condos, sales rose 1.7% to 590,000 units.

The US Department of Labor reported on Thursday, September 19, that initial jobless claims totaled 208,000, while analysts forecast 213,000. Meanwhile, the preliminary reading was upwardly revised from 204,000 to 206,000. Four-week average claims, a less volatile gauge, decreased from 213,000 to 212,250. The number of Americans who are still paid unemployment benefits decreased during the week by 13,000 to 1,661,000 from 1,674,000 (revised) a week ago, while analysts anticipated a 2,000 increase from earlier indicated 1,670,000 to 1,672,000. The unemployment rate among people who are eligible for benefits remained stable at 1.2%. The Department’s report shows that any weakness in the manufacturing sector amid the ongoing US-China trade war has little effect on the labor market because businesses continue hiring.

US equities traded sideways on Thursday, September 19. To remind, the Federal Reserve held a monetary policy meeting on Tuesday-Wednesday at which it decided to reduce its key rate by 25 bps to the 1.75-2% range, in line with analyst expectations. However, investors were dissatisfied by the fact that the regulator’s rhetoric was slightly more hawkish than expected. Specifically, only 7 out of 17 FOMC members expect another 0.25% rate cut by year end.

As for other numbers, the US 2Q current account deficit and the Philadelphia Fed Business Activity Index for September came out, with the former reaching USD 128.2 bn vs. USD 127.8 bn expected, while the latter stood at 12 vs. 11 projected.

In addition, existing home sales totaled 5.49 mn in August compared with 5.37 mn projected. The Index of Leading Indicators remained unchanged in August against the median consensus that called for a 0.1% uptick.

In the blue-chip segment, liquid names headed mostly higher, with the gains led by Microsoft, Merck, and UnitedHealth Group, while Walt Disney, Home Depot, and Goldman Sachs Group stood out among the underperformers.

Microsoft shares jumped 1.84% on news that the company’s board of directors approved higher dividend payouts and a new stock buyback program for up to USD 40 bn.

The daily chart shows that the S&P 500 continues to trade within a rising band, with the upper line at 3,086 and the lower line at 2,830. Stochastic lines are on the buy side and still far from overbought 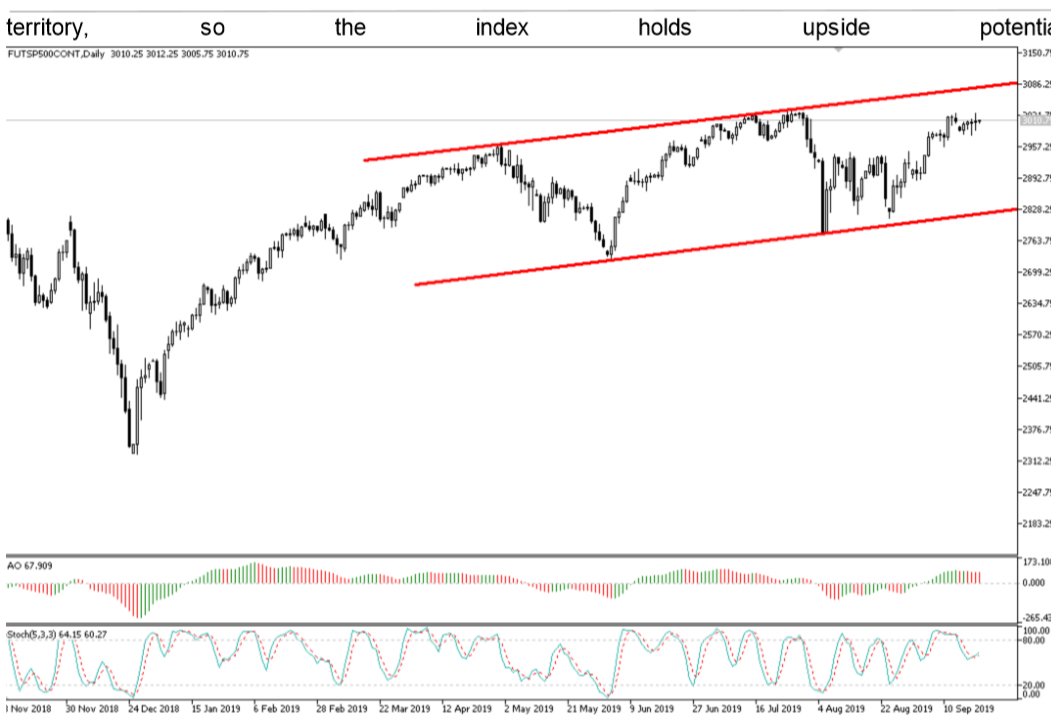 Key European stock indices delivered positive performance on Thursday, September 19, in the aftermath of the US Federal Reserve’s decision to ease its monetary policy stance. To remind, the FOMC cut the Fed funds rate by 25 bps, in line with expectations, and downwardly revised near-term interest rate projections.

In other market news, the Bank of England held its September policy meeting, at which the regulator kept the key interest rate steady at 0.75%, also leaving government and corporate bond purchases unchanged at GBP 435 bn (USD 541.5 bn) and GBP 10 bn, respectively.

Political developments surrounding Brexit remain in the spotlight. Specifically, news broke that the British government submitted a proposal to the EU to revise the current exit agreement.

British electronic trading services provider IG Group spiked 10.3% after guiding that revenues are set to return to growth in 2020.

Among the notable decliners, retailer Next plunged 5.7% after saying earnings for the fall season turned out to be worse than expected.

European bourses have been showing volatile dynamics during the first half of trading on Friday, September 20 as the OECD downgraded its global growth outlook. Moreover, the pound sterling appreciated, putting pressure on British exporters. Meanwhile, retail, healthcare and utility stocks are outperforming the broader market.

On the daily chart, the German DAX continues to trade within a rising band, while the Slow Stochastic Oscillator has long been in overbought territory. As a result, the benchmark will likely head towards the lower end of the current formation in the short term. 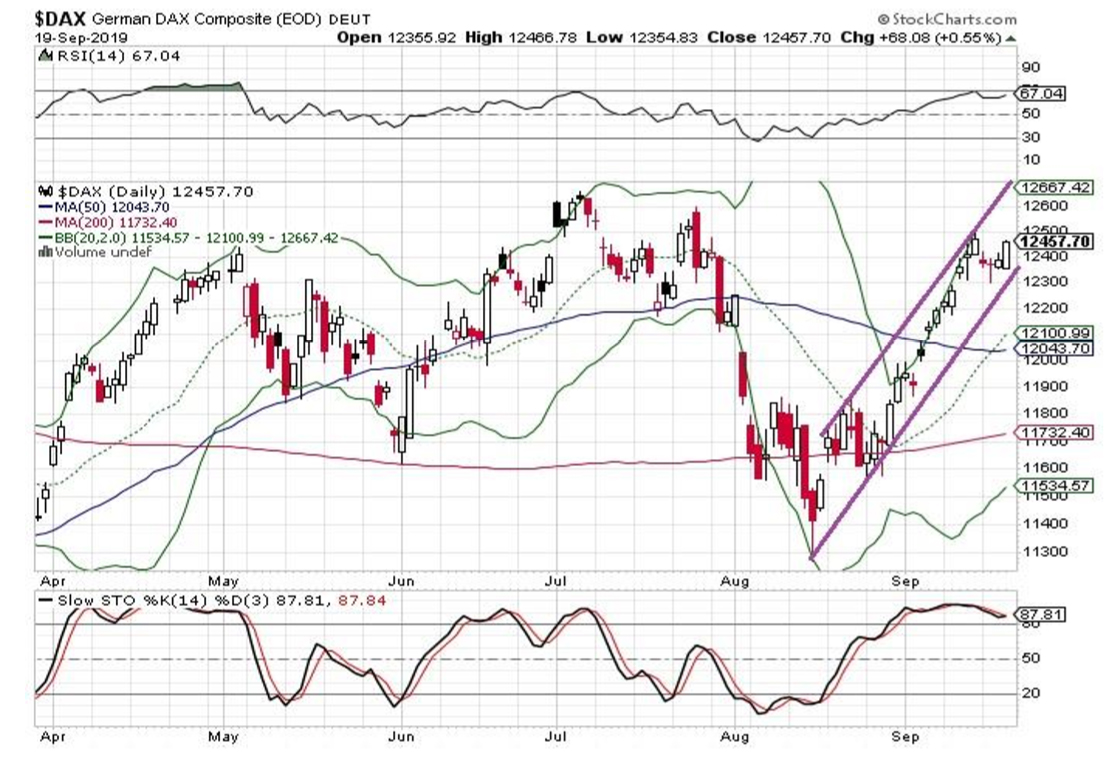 Asian stock indices landed mostly in the green on Friday, September 20, drawing support from recent monetary policy decisions by major central banks and expectations that the US and China will return to trade negotiations after all.

On the macro data front, Japan’s net foreign investment data came out, with the weekly outflow at JPY 971.9 bn compared to a JPY 161.5 bn outflow a week earlier. Moreover, the country’s CPI and core CPI for August were released. The former indicator picked up 0.3% y-o-y vs. the 0.6% y-o-y consensus forecast, while the latter stood at 0.5% y-o-y, in line with projections. Notably, China’s central bank cut the loan prime rate, which reflects funding costs for tier-one borrowers, to 4.20% from 4.25%. The Japanese Nikkei 225 added 0.16%, the Chinese Shanghai Composite advanced 0.24%, Hong Kong’s Hang Seng eased 0.13%, the South Korean KOSPI rose 0.55%, and the Australian S&P/ASX 200 closed 0.20% higher. On the S&P/ASX 200, Premier Investments and Ioof Holdings outperformed the broader market, spiking 17.37% and 7.93%, respectively. On the other side of the spectrum, Speedcast International and NIB Holdings retreated 3.87% and 4.03%. Nikkei 225 advancers included Suzuki Motor and Rakuten, which climbed 4.11% and 3.64%, respectively. On the downside, Yamato Holdings and Nippon Express sank 8.37% and 2.42%. Pub chain Hub soared 6.22% to the highest mark since February 2018. Notably, Japan will host a rugby world cup, so investors expect higher revenues at beer restaurants. Among the notable laggards, Tencent and Fanuc gave up 8.37% and 2.27%, respectively. In Hong Kong, real estate developer New World Development and technology player Sunny Optical stood out among the advancers. In the Australian banking sector, Westpac, National Bank of Australia, Australia & New Zealand Banking ended higher, while Commonwealth Bank closed marginally in the red. In the metals and mining sector, BHP Billiton and Fortescue Metals gained 0.17% and 1.0%.

From a technical standpoint, the Hang Seng continues to form a downtrend, heading towards the lower line of a rising band near the 26,200 mark.

Russian energy minister Alexander Novak noted in a speech yesterday that Russia will continue to comply with OPEC+ output cuts. He also pointed out that oil market conditions have stabilized after the recent drone attack on Saudi Arabian facilities.