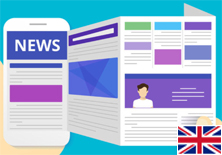 Global FX trading volumes jumped 29% in three years, with daily trading reaching USD 6.59 tn in April 2019 compared to USD 5.1 tn in April 2016, the Bank for International Settlements (BIS) said in its last triennial forex survey. The dollar remained the world’s most dominant currency and was on one side of 88% of all trades, while the euro remained in second place with 32%. A drop of 5 pps in the share of the Japanese yen to 17% kept it in third place behind the euro. However, the yen increased its share in trading against highly volatile EM currencies. In particular, yen-lira, yen-rand and yen-real trading volumes almost doubled in 2016-19. There was little change in the ranking of other major currencies and market shares vs. 2016. Sterling’s share stood at 13%, unchanged at fourth place from three years earlier, remaining ahead of the Australian dollar (7%) as well as the Canadian dollar and the Swiss franc as numbers six and seven (each 5%). EM currencies continued to gain momentum in global FX trading as their share rose to 25% from 21% in 2016. Among EM currencies, the yuan emerged as the most traded one, with a daily volume of USD 284 bn. The UK extended its dominance of the FX trading industry. The BIS said London’s share of daily volumes rose to 43% from 37% in 2016, while the US’ share shrank to 17% from 19%. In Asia, the combined share of Tokyo, Hong Kong and Singapore decreased to 20% from 21%.

US industrial output increased 0.6% m-o-m in August vs. 0.1% m-o-m in the previous month, the US Fed reported. This represents the highest reading year-to-date, while analysts, on average, projected only 0.2% m-o-m. Manufacturing output (75% of the total) was up 0.5% last month vs. 0.2% expected. Motor vehicle and parts production declined 1%, industrial equipment production rose 1%, while consumer goods output added 0.2%. Utilities and mining output were up 0.6% and 1.4%, respectively, while oil and gas extraction was down 2.5%. The US factory utilization rate increased to 77.9%, the highest percentage since March, up from 77.5% in the previous month.

Germany’s ZEW Economic Sentiment Index for the next six months climbed to -22.5 in September from -44.1 in the previous month, the Leibniz Centre for European Economic Research (ZEW) said in a report. However, the benchmark remained in negative territory for the fifth straight month. A separate gauge measuring investors’ assessment of the economy’s current conditions fell to -19.9 from -13.5 in the previous month. “The rise of the ZEW Indicator of Economic Sentiment is by no means an all-clear concerning the development of the German economy in the next six months. The outlook remains negative. However, the rather strong fears that financial experts had in the previous month regarding a further intensification of the trade conflict between the USA and China did not materialize. And there is still hope that a no deal Brexit can be avoided. In addition, the European Central Bank is attempting to reduce the economic risks in the Eurozone by further easing its monetary policy,” said ZEW President Professor Achim Wambach.

US: benchmarks eke out gains

Stocks encountered difficulty reaching positive territory. Market participants were still riveted on developments in Saudi Arabia and a start-of-the-week rally in crude, so they were not in the buying mood.

One way or another, the benchmarks advanced on the day after the Fed’s two-day meeting got under way. The markets tend to be low-key and resilient to any worrisome trends on expectations of monetary easing before the outcome of the regulator’s meeting is released.

Notably, since the beginning of the week expectations about a Fed rate cut have abated considerably. According to the CME Group FedWatch tool, futures market participants assess the likelihood of a Fed 0.25% rate cut at 54.2%, while the chance of no action is 45.8%. Only a week ago investors were nearly 100% confident about monetary easing.

On the macro data front, US industrial output rose 0.6% in August vs. 0.2% expected.

The external news flow for US trading was ambiguous as European stocks mostly advanced, while Asian equities slipped into the red.

In the blue-chip segment, the number of outperformers and underperformers was nearly the same, with Boeing, Facebook, P&G, and McDonald’s adding over 1%, while Cisco gave up more than 1%.

InterActive shares surged 3.2% after Citi Research rated the stock as a Buy.

The daily chart shows that the index continues to trade within a rising band. As it looks markedly overbought, the benchmark is likely to halt its ascent in the short term. 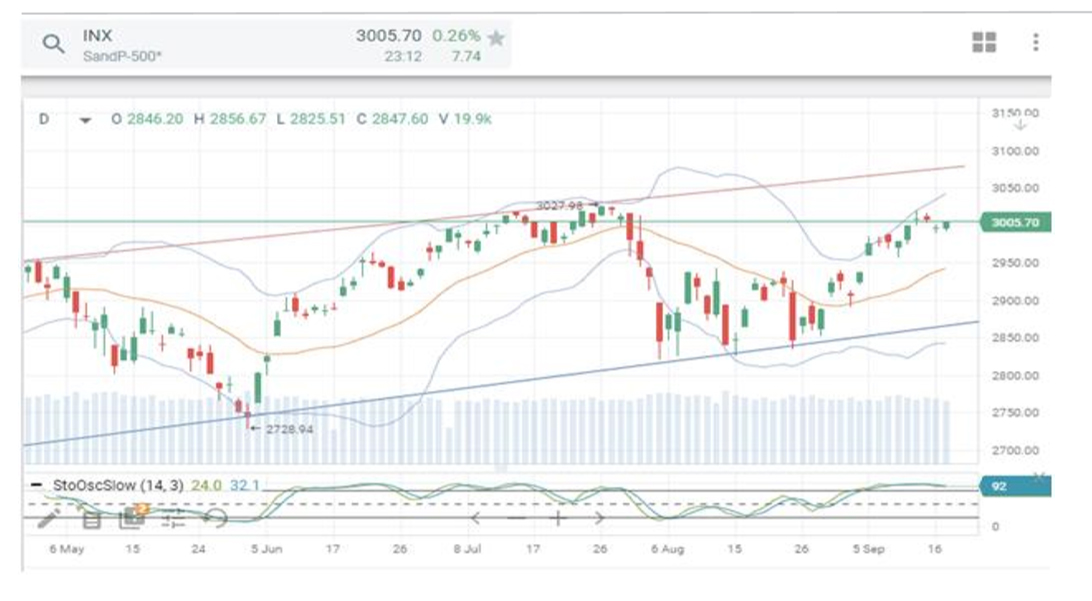 In the macro data front, Germany’s ZEW Economic Sentiment Index for September stood at -22.5, while analysts, on average, projected -37.0 after -44.1 in the previous month.

German online retailer Zalando tanked 10% on news that Sweden’s Kinnevik, a major shareholder, sold a 10% equity stake in the company.

British clothing retailer French Connection tanked 13% after saying it expects to complete the sale of its business by year end, thus delaying the closure of the deal for the second time.

European bourses have been on the rise during the first half of trading on Wednesday, September 18 as traders await the outcome of the FOMC’s two-day meeting, widely expecting a Fed funds rate cut. Moreover, corporate news remains in the spotlight.

On the daily chart, the German DAX has bounced off the upper line of Bollinger bands, whereas the Slow Stochastic Oscillator has long been in overbought territory, with the RSI hovering close to it. As a result, the downtrend will likely gain traction in the short term 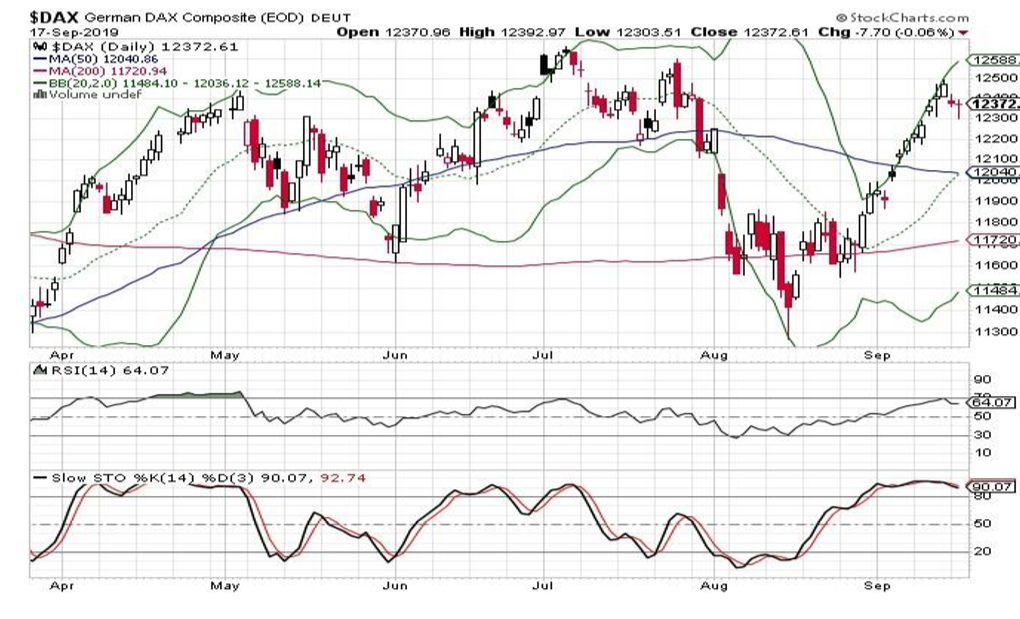 Asian stock indices turned in mixed performance on Wednesday, September 18. To remind, traders await the outcome of the FOMC’s two-day meeting, which will be announced later today. The regulator is widely expected to cut the federal funds rate band to 1.75-2.00%. Moreover, Thursday will see the policy meeting of the Bank of Japan, although it will most likely keep its monetary policy stance unchanged.

Key macro data included Japan’s trade deficit that stood at JPY 136.3 bn in August compared to the JPY 355.9 bn median consensus. Japanese exports shrank 8.2% y-o-y in the same month vs. -10.9% y-o-y expected, while imports fell 12% y-o-y vs. -11.2% y-o-y. Notably, the country’s exports were in decline for the ninth straight month. In South Korea, import prices were unchanged in August.

On the Australian S&P/ASX 200, the standout advancers included Pro Medicus and Resolute Mining, which surged 5.46% and 5.03%, respectively. Among the decliners, Worleyparsons and A2 Milk Company plunged 3.67% and 3.66%.

Conversely, airline operators came were well bid amid a sharp decline in oil prices. In particular, ANA Holdings added over 0.7%.

From a technical standpoint, the Hang Seng continues to trade within a local rising band. 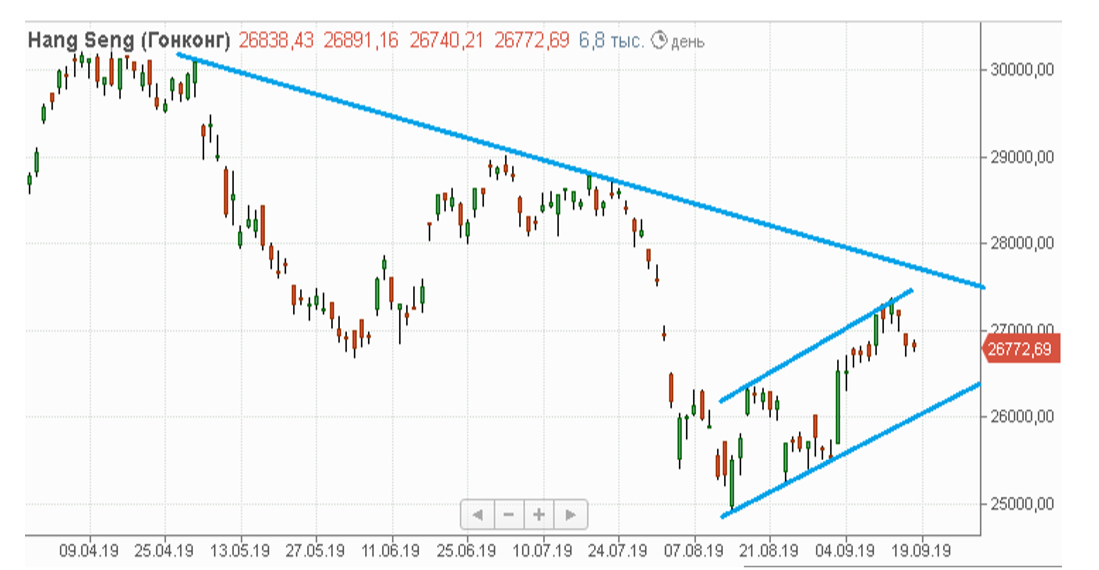 Crude futures have been slightly in decline on Wednesday after a sharp downward correction in the previous session, trading on a mixed footing amid reports that the damages sustained by Saudi oil facilities turned out to be less serious than estimated earlier. Specifically, Saudi Arabia’s energy minister Prince Abdulaziz bin Salman said the country’s oil output capacity will reach 11 mn bpd by the end of September and rise to 12 mn bpd by the end of November. According to the minister, Saudi Arabia has fully restored energy supplies disrupted by the drone attack on September 14. He highlighted that the country remains a reliable energy supplier to global markets, pledging to take measures to prevent such attacks in the future.

Meanwhile, the API reported a build in US crude oil inventories of 592,000 bbl last week, while analysts, on average, expected a drawdown of 2.5 mn bbl. Gasoline and distillate stockpiles rose by 1.6 mn bbl and 2.0 mn bbl, respectively. The EIA petroleum status report is due out at 14:30 GMT today. If the API figures are confirmed, this will be the first draw in crude inventories over the last five weeks.

Non-ferrous metals are seeing trendless trading on the LME, while gold prices are still hovering in the narrow range of USD 1,500-1,520/oz.