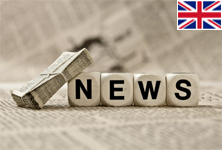 US consumer sentiment rebounds in September

According to preliminary data from the University of Michigan, the Index of Consumer Sentiment picked up to 92.0 in September from 89.8 in the previous month, the lowest mark since 2016. Meanwhile, analysts, on average, expected the indicator to recover only to 90.8. A gauge that measures what consumers think about their own financial status improved to 106.9 from 105.3 a month earlier, while yet another measure that asks about expectations for the next six months advanced to 82.4 from 79.9. Mid-term inflation expectations (one year) increased to 2.8% from 2.7%, while long-term expectations (5-10 year-horizon) declined to 2.3% from 2.6%. The recent improvements in consumer sentiment show that US consumers are more focused on signals about a robust labor market and continuing economic growth domestically and are less focused on potential impacts of trade frictions with China and a global slowdown. However, according to the survey, concerns about the impact of tariffs on the domestic economy also rose in early September, with 38% of all consumers making spontaneous references to the negative impact of tariffs, the highest percentage since March 2018. “The data indicates consumers widely expect the Federal Reserve to cut interest next week. While a recession isn’t anticipated within the year ahead, neither is a resurgence in deepest consumption,” Surveys of Consumers chief economist Richard Curtin said.

China’s industrial output increased by 4.4% y-o-y in August, the National Bureau of Statistics of China reported. Industrial output growth moderated from 4.8% in July, missing the median consensus of a pickup to 5.2%. Meanwhile, the growth rate of Chinese retail sales slowed from 7.6% in July to 7.5%, while fixed asset investment jumped 5.5% in January-August after rising 5.7% in January-July. Real estate investment climbed 10.5% in JanuaryAugust 2019 and jumped 10.6% in January-July. These numbers again confirm that the Chinese economy continues to weaken amid a trade war with the US, experts noted.

US retail sales rise in August

US retail sales grew 0.4% m-o-m in August, Department of Commerce data show. Analysts on average anticipated only a 0.2% m-o-m increase. Retail sales, net of vehicles, gasoline and construction materials (the so-called control group, an item used for US GDP calculations), rose 0.3%, as forecast. Last month 6 out of 13 main categories of retail goods showed positive numbers. Vehicles sales jumped 1.8%, construction materials up 1.4%, sporting goods rose 0.9%, medicines and hygienic products sales increased by 0.7%. Electronics sales were flat vs. July. At the same time, furniture stores registered a 0.5% contraction, food and beverage sales fell 0.2%, and clothing sales declined by 0.9%. Gasoline sales in monetary terms dropped 0.9% and department store sales were down 1.1%. On balance, quite strong retail sales show that the consumer sector remains a locomotive of the US economy which has encountered problems amid weaker demand for US products abroad, trade uncertainty and a contraction in industrial output.

A string of patchy macro data, including key data points, came out stateside on Friday, September 13.

Overall, macro data looked quite favorable. Retail sales, which have been on the rise for six months, rose 0.4% in August compared with 0.2% expected. On top of this, the July reading was revised upward from 0.7% to 0.8%. Retail sales, net of vehicles and gasoline, ticked up 0.1% compared with a projected 0.2% increase after increasing 0.9% in July. Taking into account the large proportion of everyday costs in total consumer spending, which accounts for two thirds of US business activity, these numbers are always closely watched.

Investors were also pleased by the preliminary reading of the University of Michigan Consumer Sentiment Index that surged from 89.8 in August to 92 in September, while analysts predicted a smaller rise to 90.8. Stronger sentiment of American consumers and their willingness to spend more were driven by certain improvements in economic conditions, mainly a positive trend in US labor markets.

Other numbers under the spotlight included changes in US export and import prices in August, with the latter making a contribution to the overall inflation outlook. Export prices decreased 0.6% m-o-m vs. 0.3% m-o-m expected after having risen 0.2% in July, while import prices dropped 0.5% compared with 0.4% forecast after the prior month’s reading was revised down from 0.2% to 0.1%.

As regards other macro data, business inventories jumped 0.4% in July vs. 0.3% forecast, signaling that the industrial sector is fairly confident about stable demand for its products.

Despite favorable macro data, equities saw mixed performance on Friday on the heels of a record weekly increase in the 10-year US government bond yield since 2013. This offers an attractive alternative to riskadverse investors. As a result, the trio of benchmarks showed mixed performance, with fractional changes on the day, while chalking up the straight third week of gains.

In the blue-chip universe, most liquid names (18 out of 30) closed higher, with the best performers led by Dow (+2.6%), leading US healthcare insurance company UnitedHealth Group (+2%) and financial heavyweight J.P. Morgan Chase (+1.97%). Friday’s worst performer was iPhone maker Apple (-1.94%) after Goldman Sachs Group reduced its target price for the stock. Two other decliners included the biggest US insurer The Travelers (-1.34%) and the world’s biggest fast food restaurant chain McDonald’s (-1.10%).

Power and gas grid operator PG&E spiked 10.7% after reaching an agreement with a pool of insurance companies to be paid USD 11 bn due to the damage inflicted by California wildfires in 2017 and 2018.

Meat producer Tyson Foods added 2% to its market cap as Beijing cancelled some tariffs on a number of US agricultural products, including pork.

The Progressive, a commercial truck insurance company, plunged 5.6% after reporting a 36% y-o-y decline in net income in August.

In commodities, December COMEX gold declined by USD 7.90, or 0.5%, to USD 1,499.50/oz. Gold’s investment appeal as a safe haven asset deteriorated as Washington and Beijing reportedly might strike an interim trade deal. The precious metal ended the week 1.1% lower

October NYMEX WTI fell 24 cents, or 0.4%, to USD 54.85/bbl. Crude prices decreased as Trump’s decision to dismiss national security advisor John Bolton could contribute to mitigation of tension in USIran relations, which might also include an easing of sanctions on Iranian oil exports. Oil was down 3% vs. last Friday’s close.

From a technical standpoint, the daily chart shows that the S&P 500 continues to trade within a rising wedge, with the upper line at 3,100 and the lower line at 2,880. Meanwhile, 2,850 is still a key support level. Stochastic lines are sell-friendly and have reached overbought territory, so the index is likely to make a corrective move. 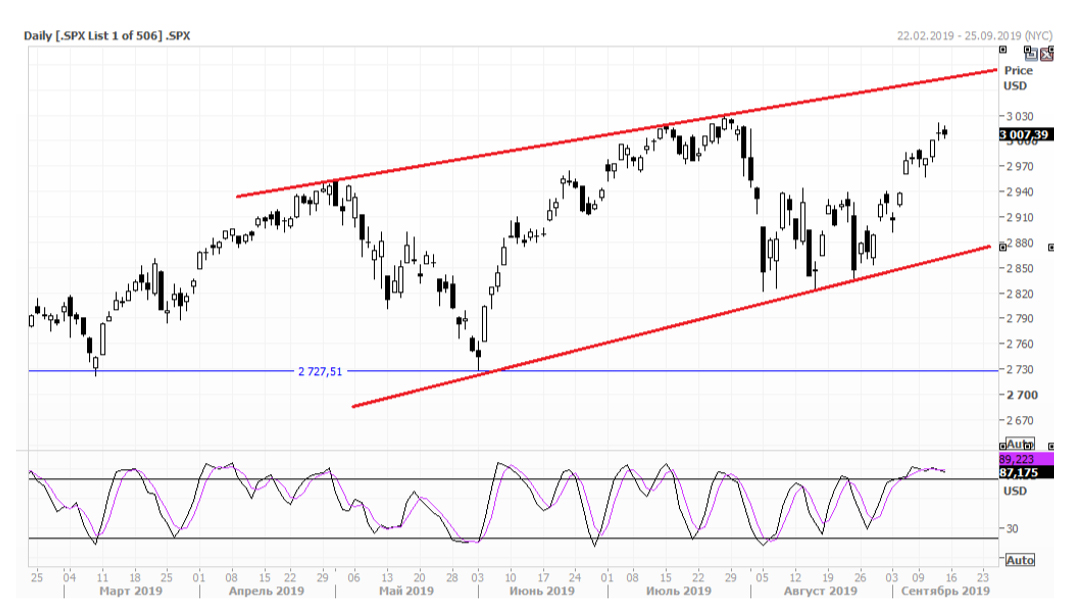 Key European stock indices landed in positive territory again on Friday, September 13, drawing support from the ECB’s decision to ease its monetary policy stance as well as the US and China’s pledge to return to trade talks shortly.

Notably, the ECB cut the benchmark deposit rate by 10 bps to -0.5%, introduced a two-tier system for interest rates and announced the restart of asset purchases at a monthly pace of EUR 20 bn effective November 1.

Meanwhile, China reportedly decided to restart purchases of soy beans, pork and other agricultural products from the US as well as exempt these goods from an additional tariff. To remind, the two countries made several concessions for each other earlier.

Among the notable decliners, infrastructure giant Atlantia sank 7.9% on reports that the Italian tax police detained three of the company’s executives.

European bourses have been in decline during the first half of trading on Monday, September 16 as investors were let down by weak macro data out of China. Specifically, retail sales rose 7.5% y-o-y in August compared to the 7.9% y-o-y consensus forecast, while manufacturing output increased 4.4% y-o-y in the same month, missing 5.2% y-o-y expected. News of a drone attack on Saudi oil facilities exacerbated overall downbeat sentiment.

The German DAX is still locked in a rising band, with the upper line at 13,000 and the lower line at 11,450. Meanwhile, the closest resistance level is 12,657. Stochastic lines are on the buy side but have already reached overbought territory, so upside potential is limited. 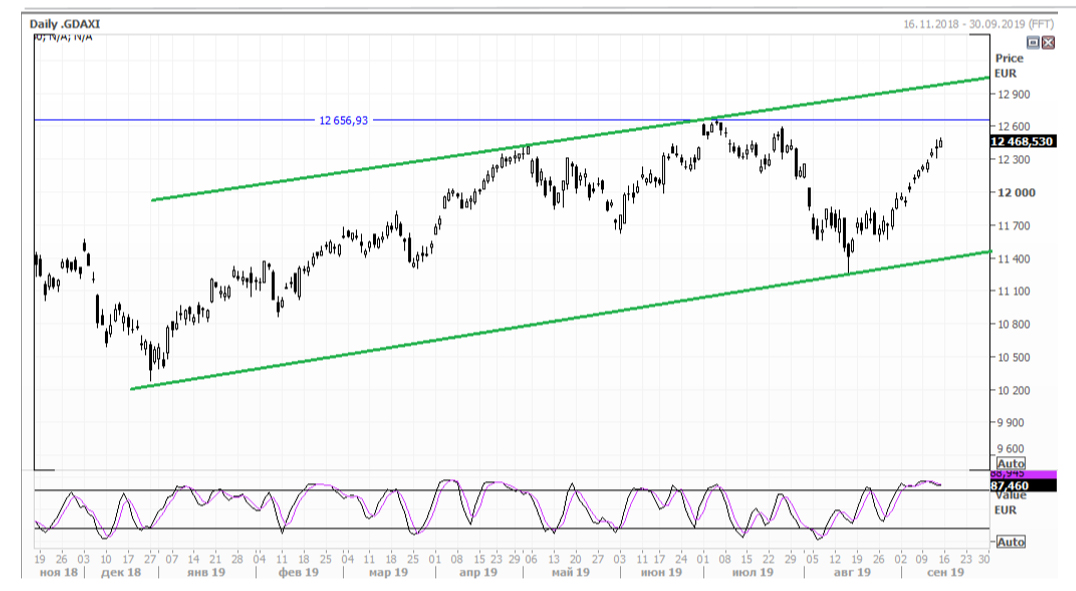 Asian stock indices turned in mixed performance on Monday, September 16. On the one hand, markets drew support from a sharp rise in oil prices following a drone attack on oil facilities in Saudi Arabia. On the other hand, benchmarks came under pressure from weak macro data out of China. Specifically, retail sales were up 7.5% y-o-y in August, slowing from 7.6% y-o-y in the previous month, compared to the 7.9% y-o-y consensus forecast. Moreover, manufacturing output increased 4.4% y-o-y in the same month, missing 5.2% y-o-y expected by a wide margin.

The Japanese market was offline today in observance of a national holiday.

The top performers on Australia’s S&P/ASX 200 included Bellamy’s Australia and Blackmores, which spiked 54.93% and 9.4%, respectively. On the other side of the spectrum, Sims Metal Management and Qantas Airways plunged 13.28% and 4.53%. O&G stocks stood out among the advancers as oil prices rebounded. In particular, CNOOC and Beach Energy soared 7.2% and 5.98%.

From a technical standpoint, the Hang Seng is extending its ascent towards the nearest resistance level near 27,750. 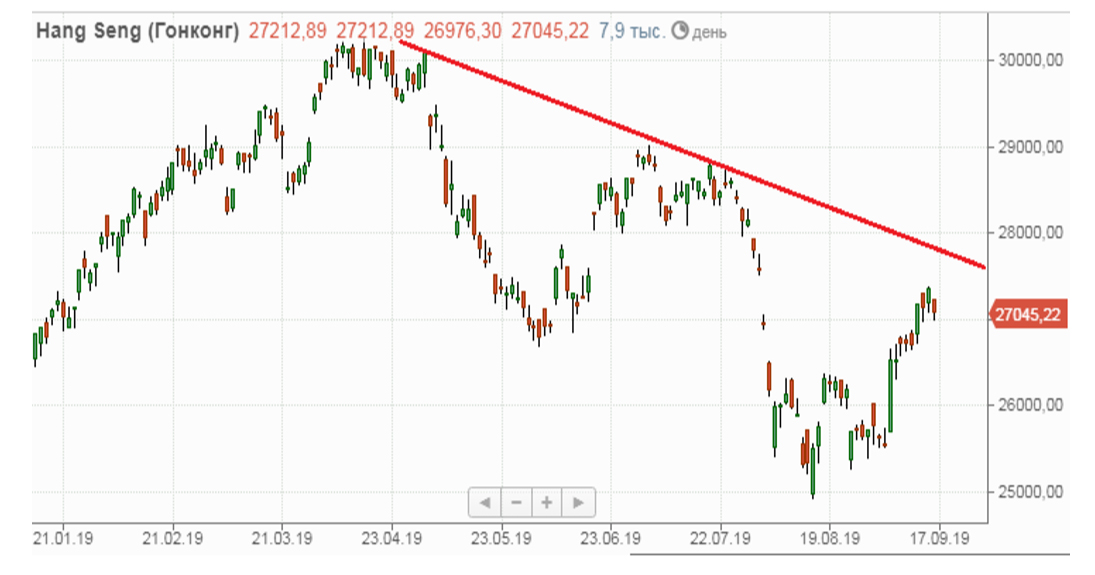 Crude prices spiked on Monday after media reports that Saudi Arabian oil production facilities experienced a coordinated drone attack that has reportedly reduced global output by close to 6%. On Saturday morning, Saudi Arabia’s largest oil refining facility, Abqaiq, and the large Khurais oil field were attacked by drones. The attack knocked out approximately 5.7 mn bpd, or about half the kingdom’s production. Saudi staterun oil producer Saudi Aramco expects to restore up to one third of lost output by the end of Monday. Moreover, President Donald Trump ordered to tap to the US Strategic Petroleum Reserve to stabilize oil market conditions if necessary.

Houthi rebels in Yemen have already claimed responsibility for the attacks. Meanwhile, US Secretary of State Mike Pompeo said that Iran should be held liable for the attack. The White House reported that Trump held negotiations over the phone with Saudi Arabia Crown Prince Abdulaziz bin Salman to express “his support for Saudi Arabia’s self-defense”. The Iranian foreign ministry, in turn, said that US accusations are groundless.

Non-ferrous metals are mostly in decline on the LME, while gold continues to hover around USD 1,510/oz.