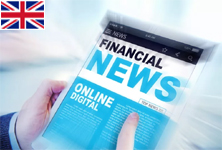 Trade volume between Germany and the UK shrank significantly in 5m 2019, the German Chamber of Industry and Commerce (DIHK) said in a report. Firms from Germany exported goods worth around EUR 35 bn to the UK from January to May this year, a 2.3% decline compared to the year-earlier period. Imports from Britain fell even more sharply – by 6.1% to EUR 15 bn. As a result, the UK is currently only ranked seventh among Germany’s most important trading partners. By comparison, in 2017 it was in fifth position and in 2018 the UK was ranked sixth. DIHK President Eric Schweitzer and other representatives of the German economy earlier warned London against a no-deal Brexit. Yet even without the looming threat of a no-deal, Brexit has already become a burden for the German economy, Schweitzer said. According to him, a total of 70% of German companies with business in Britain expected trade to drop in 2019, while every eighth company with business there wants to shift its investments to other markets – above all to countries in the EU internal market. However, “the new British government still has a chance to limit the negative impact of the Brexit on the economy on both sides of the channel,” said Schweitzer. To remind, the UK initially planned to leave the EU on March 29, but failed to have an approved Brexit plan in place by that time. In April, the 27 EU member states at their extraordinary meeting in Brussels agreed to give London until October 31 to complete the exit.

Goldman Sachs: risks of a US recession grow due to the trade war with China

The trade war with China has produced a bigger impact on the US economy than previously expected, raising the risks associated with a recession in the United States, Goldman Sachs analysts think. “We have increased our estimate of the growth impact of the trade war. Fears that the trade war will trigger a recession are growing,” said a press release issued by the bank’s experts led by chief economist January Hatzius. They believe that the trade conflict with the US will dampen US economic growth by 0.6% this year instead of an earlier expected 0.2%. In addition, experts reduced their US 4Q GDP growth by 0.2% to 1.8% y-o-y. Analysts think that the two countries will not make any trade deal until presidential elections that will be held in the fall of 2020. Moreover, they think that President Donald Trump will deliver on his promise to introduce a 10% tariff on USD 300 bn of Chinese products.

US: equities in sell-off mode

US stocks closed deep in the red on Monday, August 12.

Pessimism set in on US trading floors at the beginning of the week as worries about the US-China trade conflict persist.

Market participants continue to watch anxiously the yuan which declined to an 11-year low a week ago, and for the time being USD/CNY has resolutely held above the psychological important 7.0 mark.

In addition, sentiment was marred by events in Hong Kong, with mass demonstrations in progress.

It should be noted that no market-driving macro data came out stateside yesterday.

The external news flow for US trading was mixed as European stocks largely dropped, while Asian equities advanced.

In the blue-chip segment, only Merck closed higher, while the likes of Pfizer, Goldman Sachs, Caterpillar, Tesla, and Disney pulled back over 2%.

Among the top underperformers, US oil producer Occidental Petroleum slid 4.5% after Evercore analysts spoke negatively about the company.

Biopharmaceutical giant Amgen spiked 6% as the judge upheld the validity of its two patents which Novartis challenged.

The daily chart shows that the index made slight attempts to return to the formation after an earlier breakout of a falling wedge but at this stage it is still likely that the index could correct lower. 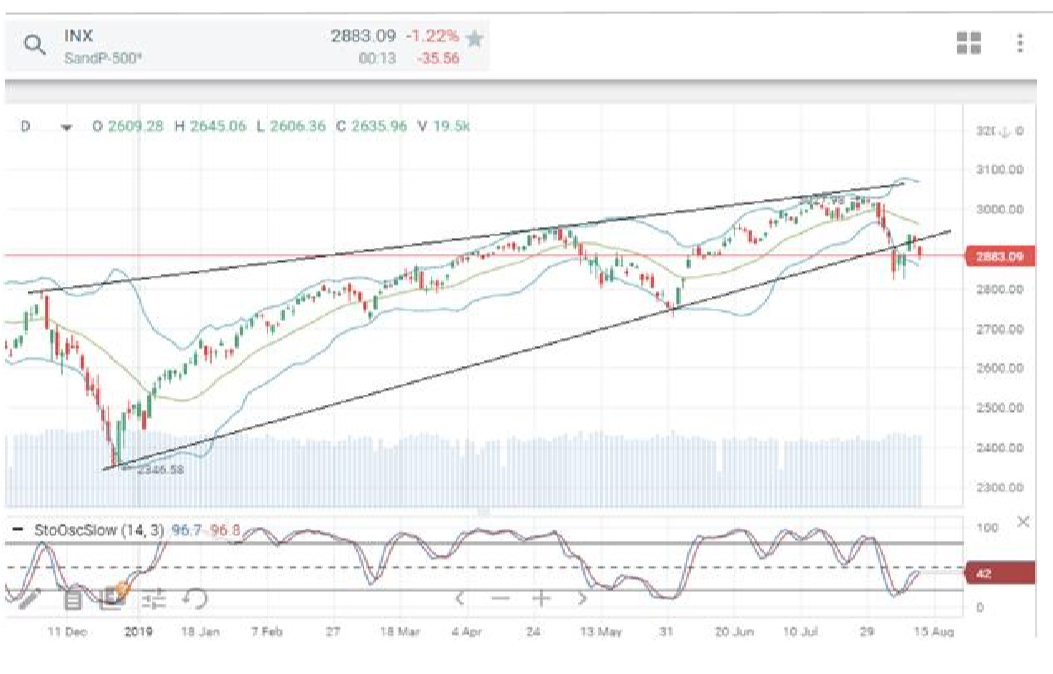 Key European stock indices extended losses on Monday, August 12, coming under pressure from political turmoil in Italy as well as unabated trade tension between the US and China.

Last week, analysts at Goldman Sachs warned that US recession risks are increasing as the US-China trade war gains traction. According to Goldman Sachs, US GDP will grow 1.8% y-o-y in Q4 2019, down from 2.0% y-o-y anticipated earlier, while the two countries will likely fail to seal a deal before the US presidential election in the fall of 2020.

No market-driving data came out yesterday, while the external environment was negative as Asian markets had closed in the red, and US equities were in decline.

Italian lenders underperformed the broader market for the second straight session. In particular, UniCredit, Unione di Banche Italiane and Banco BPM shed 1.45%, 0.81% and 1.43%, respectively, on concerns that the coalition government may fall apart.

Austria’s AMS tanked 11.8% on news that it submitted a new bid to take over Germany’s Osram Licht for EUR 3.7 bn. Notably, the latter soared 10.4% on the day.

British O&G player Tullow Oil shot up 19.8% on reports that it made a large oil discovery in Guyana.

Key European stock indices have been on a downward track during the first half of Tuesday, August 13, with banking names underperforming. Specifically, investors remain concerned about the US-China trade war, with political uncertainty in Italy, Hong Kong and Argentina adding to global risk-off sentiment.

The daily chart shows that the German DAX is hovering near the lower line of Bollinger bands after having repeatedly broken through it, while the Slow Stochastic Oscillator is about to exit oversold territory. As a result, an upturn could be in the offing. 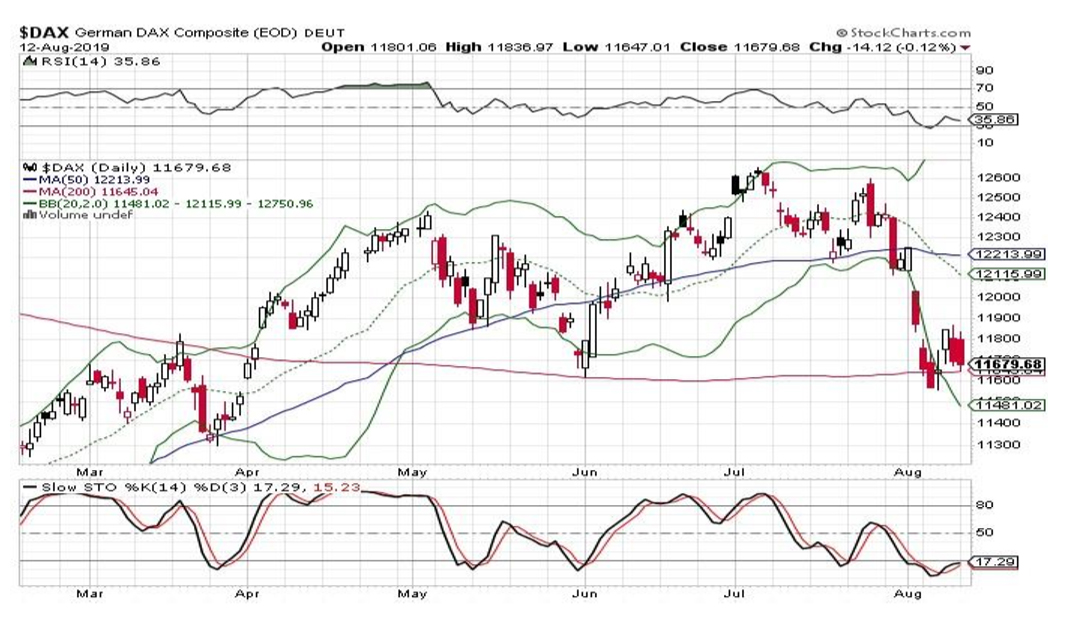 Asian stock indices turned in predominantly negative performance on Tuesday, August 13, specifically on the heels of ongoing protests in Hong Kong and an earlier slump in Argentinian equities. Adding to overall downbeat sentiment, Donald Trump said that the September round of the US-China trade talks could be called off.

On the macro data front, Australia’s NAB Business Conditions Index and the NAB Business Confidence Index for July were released. The former came in at 2, down from 3 in the previous month, while the latter stood at 4, up from 2 in June. In New Zealand, food prices added 1.1% in July. Singapore’s Q2 GDP decreased 3.3% q-o-q vs. -2.9% q-o-q expected. In y-o-y terms, the indicator ticked up 0.1% vs. the 0.2% consensus forecast.

The S&P/ASX 200 standout advancers included Aurizon Holdings and Fortescue Metals, which surged 3.32% and 3.16%, respectively. On the other side of the ledger, Orocobre Limited and CYBG slid 6.76% and 5.83%.

Japanese exporters were out of favor as the yen strengthened. In particular, Honda Motor and TDK shed over 2.5%.

Tech stocks came under pressure, with Samsung and Foxconn dipping over 1%.

From a technical standpoint, the Hang Seng is testing the lower end of a descending band in the vicinity of 25,300. 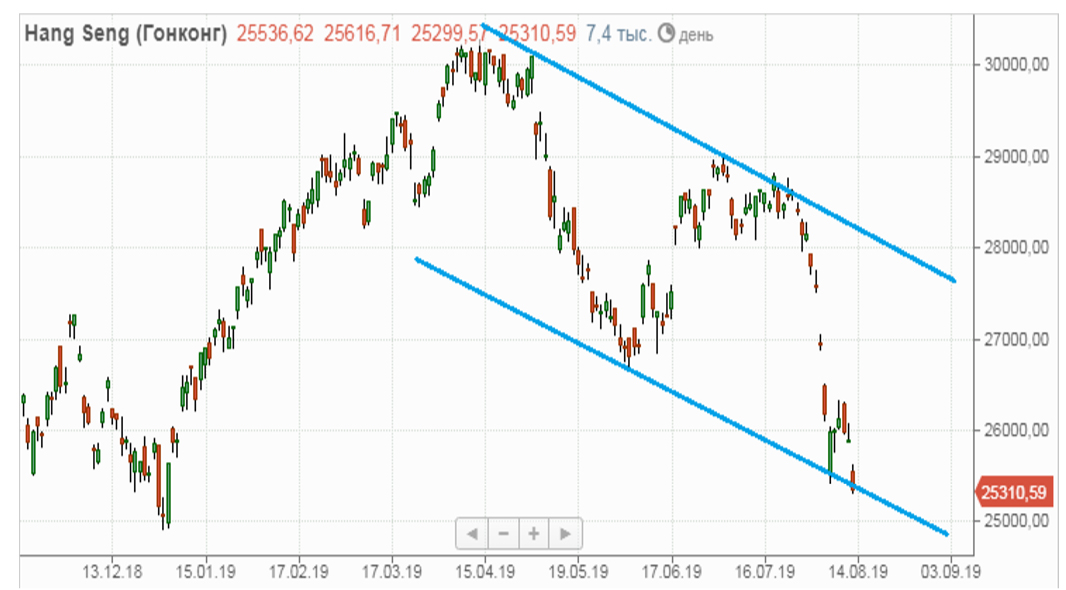 Oil has been on a downward trajectory on Tuesday as conditions on global financial markets deteriorated. Risk-off sentiment grew amid persisting worries about the US-China trade conflict, the end of which is still not in sight. In addition, investors have anxiously monitored events surrounding Hong Kong where mass demonstrations begin to paralyze the city, and Argentina, with the stock market suffering yesterday the biggest crash ever. Over the next few days, traders will keep an eye on US inventories data. Analysts forecast US crude stockpiles to decline by 2.3 mn bbl last week. To remind, US inventories unexpectedly showed a 2.4 mn bbl build a week ago, with the indicator rising for the first time in eight weeks.