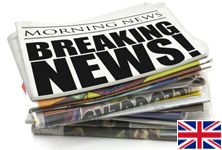 Preliminary figures from the Office for National Statistics (ONS) showed that the UK’s Q2 GDP was down 0.2% q-o-q vs. a 0.5% increase in the previous quarter, while in y-o-y terms, the country’s economy increased 1.2% after 1.8% in Q1 2019. Consumer spending rose 0.5% q-o-q as wages continued to grow, while the unemployment rate remained low. Government spending increased 0.7%. However, business investment fell 0.5% q-o-q and 1.6% y-o-y. Imports and exports shrank 13% y-o-y and 3.3% y-o-y, respectively. Growth was greatly impacted by destocking as companies released inventories accumulated ahead of March 29, initially set as the Brexit date. In money terms, inventories fell GBP 4.4 bn on the quarter. Final Q2 GDP data is due out on September 30. Moreover, the ONS said that the UK’s manufacturing output decreased 0.1% m-o-m and 0.6% y-o-y in June. Furthermore, the country’s trade data for June came out. Specifically, the trade deficit contracted to GBP 7 bn from GBP 10.7 bn in May.

Canada’s unemployment up to 5.7%

Canada’s unemployment rate rose from 5.5% in June to 5.7% in July, official statistical data show. Meanwhile, analysts did not expect any changes. Canada’s jobs declined by 24,200 in July after a 2,200 contraction in June. The country’s workforce jumped by 353,000, or 1.9%, against July 2018. The labor force participation rate decreased from 65.7% in June to 65.6% in July. The number of people employed in wholesaling and retailing decreased for the second straight month. On the other hand, employment in construction and public administration sectors increased. People employed by private businesses dropped, while the number of selfemployed rose. A contraction was also recorded in the labor force participation rate among people aged 15 to 24.

Trump: the US will not weaken dollar deliberately

Washington does not have any plans to weaken the dollar, President Donald Trump claimed. ““No, we don’t have to,” he said when asked. “We have the safest currency of the world, we have the standard of the world,” Trump noted, adding if the Federal Reserve cuts rates, this will automatically depress the dollar somewhat, easing pressure on exporters. To remind, previously Trump has repeatedly criticized the Fed for its too tough monetary policy that, in his opinion, puts the US in a disadvantage compared with other countries and slows economic growth in the country. In addition, the US leader claimed that the trade talks with China have gone very well. However, he assumed that a new round of trade negotiations, which is scheduled for September, could be cancelled. “…we have an open dialogue. We’ll see whether or not we keep our meeting in September. If we do, that’s fine, if we don’t, that’s fine”.

Only one market-driving data point, albeit not a key one, came out stateside on Friday, August 9. The US PPI for July, in line with our expectations, improved 0.2% after rising 0.1% in June. The Core PPI (excluding food and energy) dropped 0.1% (for the first time since the beginning of 2017) vs. a forecast 0.1% uptick and after a 0.3% increase in the previous month. Meanwhile, the former improved 1.7% y-o-y, while the latter jumped 2.1% y-o-y.

Sentiment still depended substantially on hot news from the US-China trade front. Trump’s latest remarks to the effect did not make investors happy. Initially, he claimed that notwithstanding pledged easing US businesses are still not advised to cooperate with Chinese technology giant Huawei Technologies. Later he challenged another round of trade negotiations in September. When doing so, in his manner he again said that he is optimistic about the current condition of the trade talks but he drew an unexpected conclusion about slim chances of a comprehensive trade deal to be reached by the conflicting parties. All these remarks disappointed market participants greatly, setting a session-long downtrend. As a result, the trio of benchmarks landed in the red and posted weekly losses.

Shares of Yelp, an operator of a popular online service which helps find doctors, lawyers and home service providers, jumped 5.2% after reporting higher-than-expected profit in 2Q.

Publisher News Corp, the owner of The Wall Street Journal and The New York Post, spiked 5.1% as EPS in fiscal 4Q beat the median consensus.

Among the worst performers, the third-biggest US retailer J.C. Penney tanked 13.5% to 60 cents after NYSE management sent a notice that the company’s shares do not comply with listing requirements because the stock failed to reach the USD 1.00 threshold within a month.

Biopharmaceutical company Nektar Therapeutics crashed by 29.3% as problems unexpectedly arose in the production of its experimental cancer drug (Bempeg).

December COMEX gold fell by USD 1.00, or less than 0.1%, to USD 1,508.50/oz. Gold prices remained unchanged due to the lack of catalysts capable of sustaining a stable price trend. For the second week in a row, gold jumped 3.5%.

September NYMEX WTI climbed by USD 1.96, or 3.7%, to USD 54.50/bbl. Oil prices increased as the US rig count continued to fall for the sixth straight week, according to the Baker Hughes data. However, crude prices dropped 2.1% on the week.

From a technical standpoint, a rising wedge could shape up on the S&P 500 daily chart. Meanwhile, the closest support level is 2,840 and the resistance level is 3,060. Stochastic lines are on the buy side but will soon reach overbought territory, so we expect the index to stop rising.

Key European indices landed in negative territory on Friday, August 9 amid political tension in Italy and lingering trade frictions between the US and China.

Notably, Italian Vice-PM Matteo Salvini called for a snap general election as there is no longer a majority in parliament, whereas the Italian people need certainty. Salvini insists that the country’s PM Giuseppe Conte should put the government on a parliamentary vote of confidence. Notably, the conflict escalated after the Five Star Movement voted against a multi-billion project to build a railroad between Torino, Italy and Lyon, France.

Adding to downbeat sentiment, Donald Trump said a new round of US-China trade talks scheduled for September could be called off. According to him, the two countries still have an open dialog, but it is premature to say whether their trade representative get to meet in September.

Italian lenders took a hit on the heels of concerns that the ruling coalition may break up. In particular, UniCredit, Unione di Banche Italiane and Banco BPM plunged 5.1%, 5.9% and 9.1%, respectively.

Advertising firm WPP soared 7.21% despite reporting a decrease in pre-tax profit and like-for-like sales. On the other hand, the company posted strong H1 revenue, which rose 1.6% y-o-y to GBP 7.62 bn.

Key European stock indices have been mostly in decline during the first half of Monday, August 12, on the heels of news out of Asia. Specifically, Hong Kong’s Airport Authority cancelled all departure flights for the rest of the day after thousands of protesters wearing masks flooded into the main terminal.

German DAX has hovered within the 11,610-11,800 horizontal band. Meanwhile, the key support level is still 11,620. Stochastic lines are buy-friendly and slightly above overbought territory, so we assume that the index could rebound towards 12,000. 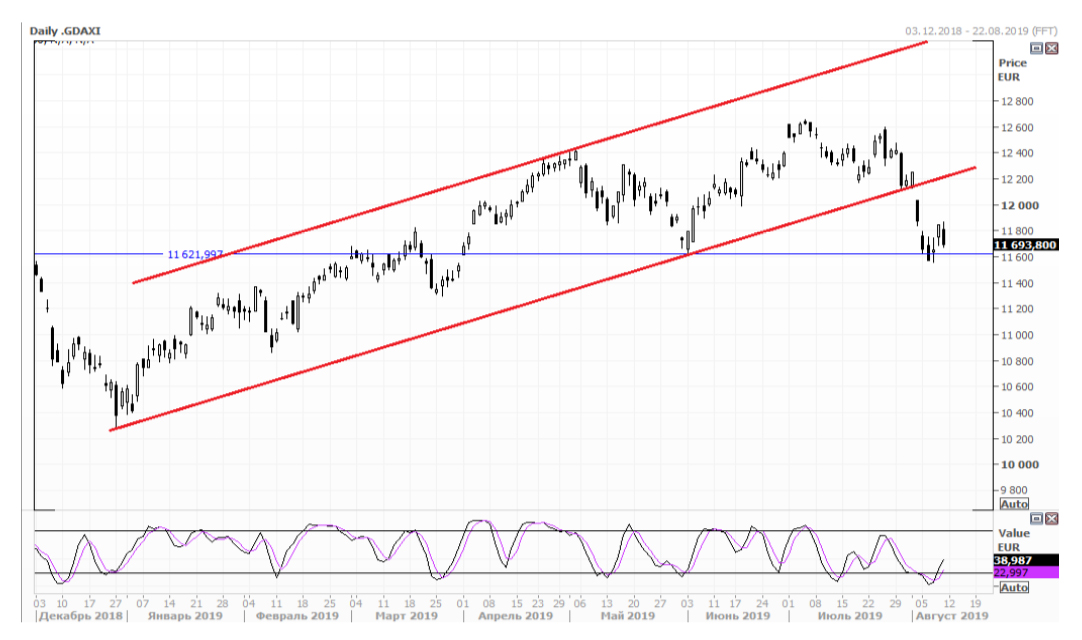 Asian stock indices turned in mostly positive performance on Monday, August 12 despite lingering tension surrounding the US-China trade war. Moreover, China’s central bank fixed the midpoint for onshore yuan trading at 7.0211 per dollar, with the midpoint remaining below the 7.0 mark for the third straight session.

Notably, the Japanese market was offline in observance of a national holiday. No market-driving macro data came out today.

In Australia, Fonterra pulled back 4.8% after saying it will not pay dividends for the current year, while retailers Wesfarmers и Woolworths picked up 0.4% and 0.5%, respectively, on the back of quarterly earnings.

From a technical standpoint, the benchmark is consolidating slightly above the 25,000 mark, with the corrective rebound likely to extend towards 27,000 in the short term. 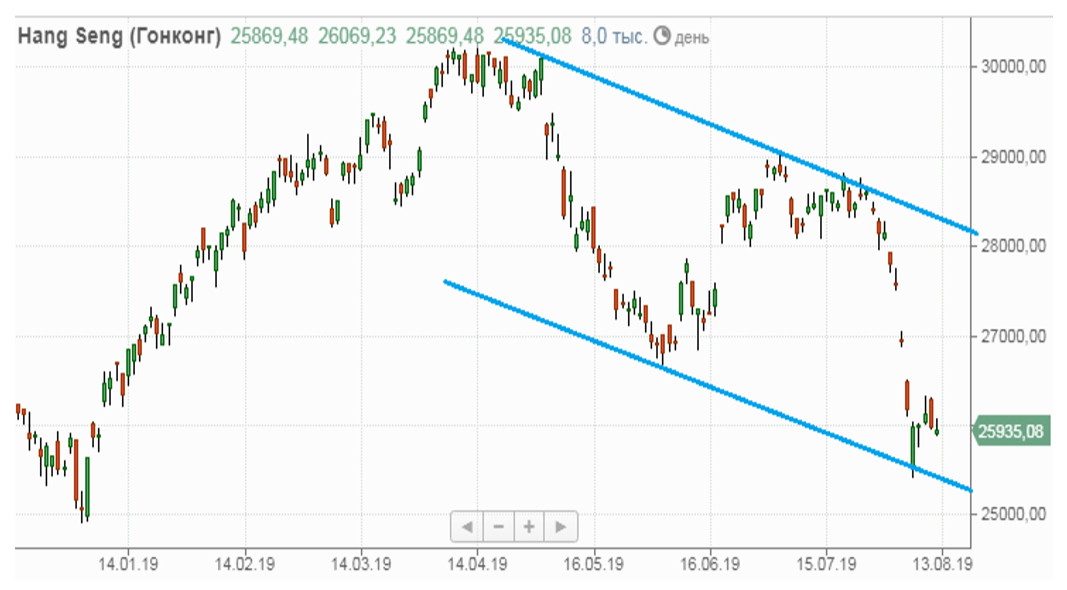 Oil has dropped moderately on Monday. Sentiment remains mixed, with pressure coming from persisting worries that the enduring US-China trade conflict will dampen global crude demand. President Donald Trump claimed that a new round of trade negotiations with China in September could be cancelled. Meanwhile, he warned that new tariffs on Chinese products are possible. At the same time, some support came from reports that Saudi Arabia is going to take measures to support the crude market. Specifically, Riyadh is ready to hold oil exports below 7 mn bpd in September.

Meanwhile, the International Energy Agency (IEA) published a report, according to which global oil demand grew only by 520,000 bpd in January-May 2018, or the lowest growth rate since 2008. Meanwhile, the IEA reduced its outlook for global economic growth for 2019 and 2020 by 100,000 to 1.1 mn bpd and by 50,000 bpd to 1.3 mn bpd, respectively. As a reason for a downgrade, IEA experts mention the negative effect from a global economic slowdown amid escalation in US-China trade relations.

Non-ferrous metals are range-bound on the LME, while gold continues to hover around USD 1,500/oz.