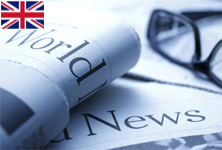 The British economy expanded by 0.5% q-o-q in the first quarter of 2019, final ONS data showed. GDP grew 1.8% y-o-y. The figures matched both the preliminary estimate and the median consensus. To remind, UK GDP grew 0.2% q-o-q and 1.4% y-o-y in October-December 2018. Business investment rose 0.4% q-o-q in the first quarter, while budget spending increased 0.8%. Household spending jumped 0.6%, goods and services exports climbed 1.5% compared with the prior quarter when the metric dropped 0.6%. Imports jumped by 10.8% after rising 2.1% in October-December. In line with the Bank of England’s current forecast, the British economy will expand 1.2% this year, or at the slowest pace since 2009, and 1.5% next year. The regulator expects zero q-o-q changes in the second quarter. It became known that the UK current account deficit totaled GBP 30 bn (USD 38 bn) in 1Q vs. GBP 23.7 bn a quarter earlier.

The European Central Bank (ECB) could send a signal to markets next month that it is ready to ease monetary policy, a poll conducted by news agency Bloomberg showed. Experts believe that after this the regulator will cut rates in September in an attempt to help the euro region’s economy recover. Most respondents think that the regulator’s Governing Board will change on July 25 the wording of a monetary policy statement from the current version (key rates will remain at the current level at least until the end of the first half of 2020). At the latest ECB meeting held in early June, the regulator’s deposit rate was left unchanged at a record low of -0.4%. Economists on average forecast it to be reduced by 0.1% to -0.5% in September. Futures pointto the same scenario. Meanwhile, HSBC analysts anticipate a similar rate cut in December, while ABN Amro expects the regulator to do the same in early 2020. Earlier the ECB hoped to start a gradual increase of credit rates throughout 2020 but a prolonged period of softer monetary policy is more likely at the moment because US actions have dampened global economic growth.